Imo is one of the 36 states of Nigeria and lies in the South East of Nigeria. Owerri is its capital and largest city. Its other major cities are Orlu and Okigwe. Located in the south-eastern region of Nigeria, it occupies the area between the lower River Niger and the upper and middle Imo River

Imo state is blessed with lots of undeveloped tourist sites and below are the list of top 5 places of interest in the state.

Oguta is a town on the east bank of Oguta Lake in Imo State of southeastern Nigeria. It is the administrative seat for Oguta LGA and is the home to the famous oguta lake.
Oguta lake is Nigeria’s second largest lake. It is a popular tourist spot in imo state as the lake has a beautiful blue colour, and is neither salty nor home to crocodiles, making it Ideal for swimming and water sports.
The complex runs a cruise service giving visitors a chance to get out onto the lake. Aside from the lake, the complex is known for its full sized, 18 hole golf course. There is also a children’s recreation park. 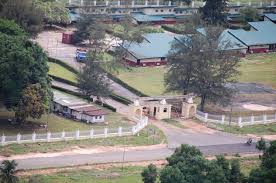 2. Mbari house
Mbari is a visual art form practiced by the Igbo people in southeast Nigeria consisting of a sacred house constructed as a propitiatory rite. Mbari houses of the Owerri-Igbo, which are large opened-sided square planned shelters contain many life-sized, painted figures (sculpted in mud to appease the Alusi (deity) and Ala, the earth goddess, with other deities of thunder and water). Other sculptures are of officials, craftsmen, foreigners (mainly Europeans), animals, legendary creatures and ancestors. Mbari houses take years to build and building them is regarded as sacred. A ceremony is performed within the structure for a gathering of town leaders. After the ritual is complete, going in or even looking at the Mbari house is considered taboo

3. Nekede Zoo
The Nekede zoo is located in Owerri West Local Government Area of the state. The zoological garden established in 1976 under the state Ministry of Agriculture as an animal park, the Nekede Zoological Garden which sits on 10 hectares of reserved forest, houses a variety of animals, including lions, chimpanzees, monkeys, pythons, ostriches and crocodiles, among other animals.Although the zoo had suffered obvious neglect under successive administrations in the state, it has managed to exist until the current administration of Rochas Okorocha intervened by providing funds for the upgrade of existing infrastructure and the upkeep of the animals. The zoo serves as a centre for recreation, entertainment and education across the five Southeast states and beyond. Families, schools and other professional bodies throng there to enjoy the beauty of nature and carry out academic research in nature and wildlife.

4. Ada palm palm plantation complex
The Ada Palm Plantation Complex situated in amafor and Egbema in Ohaji/Egbema LGA of Imo State, is believed to be the biggest and most viable oil palm plantations in West Africa. The palm plantation was established in 1974, occupies about 4,310 hectares of land, with a housing estate and was one of the nation’s major sources of foreign exchange before the discovery of Petroleum.

5. Abadaba Lake
This is the second most prestigious lake in Imo state after Oguta. Though abandoned and not developed optimally for tourism, the Abadaba lake is an interesting and adventurous place to visit. The lake has a temperature of between 260C to 320C during the June to September raining season, while the nights are cool during this same period with the lowest temperature ranging from 100C to 1200C. If you intend visiting the lake during the rainy season, get set for a long adventurous drive from Owerri and ensure you have your raincoats and boots on. The lake is situated between the serene villages of Odenkume and Okwuohia and another small village called Umuezegwu – which is also beautiful place worth visiting.

20 Most Popular Beaches In The World

One thought on “Top 5 places of interest in Imo State”